HELA, not just to be considered in Medicine?

NB the below is very incomplete so far, just add it to refer to those I think it can give some idea of my work since 1986, not really any published after my dissertation, which was really is a first very small step … more will come when my health is back …
The reason for not publishing is not only lack of time (money to write) but also that I each day improve my work so all will be old next day. First now, I will focus on writing on websites, where I can update continuously …

Draft:
Much is discussed about critical education, e.g. Thales (Summarized of the paradigm used by Bo von Schéele | Biopsychosocial Medicine – NB in Swedish = Vetenskap | Stressmedicinsk Centrum (stressmedcenter.com) but not much about an evolutionary point of departure of human development including Triune Brain https://en.wikipedia.org/wiki/Triune_brain as well as Dual-coding theory https://en.wikipedia.org/wiki/Dual-) coding_theory#:~:text=According%20to%20Paivio%2C%20there%20are,is%20used%20to%20represent%20information.&text=Both%20visual%20and%20verbal%20codes%20can%20be%20used%20when%20recalling%20information

NB I do not discuss details, only have the links above as indication of (a) we need to consider the evolution of human and especially human brain as a gradually extension over million of years – as Zimbardo said – a house jerk. Reptilian, Limbic Mammalian were human brain is the last step – so far – and we have to be aware and consider this impossible possibility we are equipped with!  Hard? But, that is where we have to deal with. The good news is that we do have survived thanks to ability to process incomplete information, which is not the case for old computers.

So, in spite of lack of knowledge about how spatial and verbal systems interplay as well as with more basic reptilian brain (in humans), we do need to try to incorporate it while it is apparently what is the foundation of human mental information processing.

Relying on the work of George Kelly, who was much influenced by John Dewey https://en.wikipedia.org/wiki/George_Kelly_(psychologist) and further develop his “man as a scientist”-metaphor, I have used in my pedagogical clinical work an approach I now call HELA.

By focusing on “?” independent of what is the present “?-target” – also used it as folk high school teacher – I have found it promising in patient group education using a manual based on my dissertation 1986 “COOL, Chief of One Own´s Life” = Co-Determination in Life (Swedish Medbestämmande livet) in the clinical expression “patient as a reasonable well educated resource and coworker in own rehab”, that is a biopsychosocial medicine toolbox where patient are tailoring there own tools.

Here is the HELA included to be used when an individual have a “?” or are encourage to become a “?”.

Below I only discussed HELA strategy briefly. Later on, writing in more detail.

But first the toolbox COOL 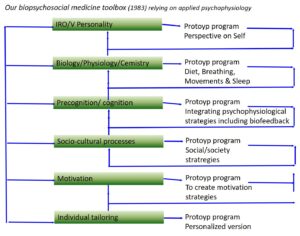 Then the HELA strategy